Composer Michael Hersch consistently writes music with emotional immediacy that explores aching vulnerability with consummate eloquence. His Violin Concerto is like a wound still raw. Soloist Patricia Kopatchinskaja ramps up the intensity, as does ICE, conducted here by Tino Muñoz, rendering the work’s first and third movements with bracing strength and its second with fragile uneasiness. This emotion returns, amplified by high-lying solos and echoing attacks from the ensemble, to provide a tensely wrought close to the piece.

Orpheus Chamber Orchestra is renown for their conductor-less approach to chamber orchestra works. Still, the coordination and balance they exhibit on Hersch’s end stages deserves particular praise. Glacial slabs of dissonant harmonies give way to howling French horn and a buildup of contrapuntal intensity. This is succeeded by a tragically mournful tune accompanied by a bee’s nest of clusters and sliced string-led attacks. Taut wind dissonances then punctuate an angular, rambling string melody, succeeded once again by nervous pile-ups of angular crescendos. The seventh movement is buoyed by heraldic trumpet and vigorous repeated string chords, while the finale returns to a colorful, harmonically ambiguous ambience. The piece is Hersch at his most Bergian, bringing together artful organization and visceral emotion. Recommended. 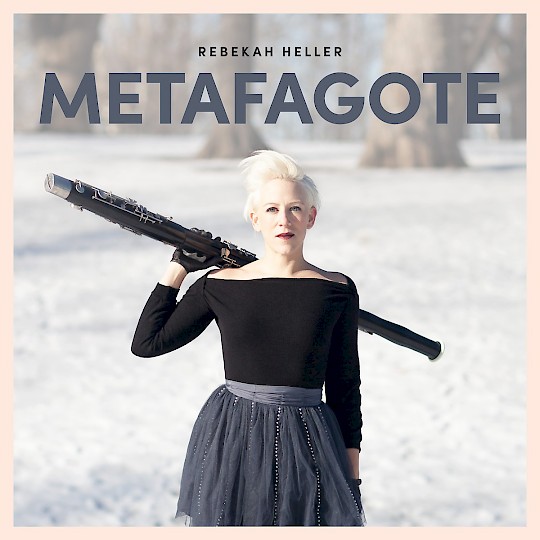 Bassoonist Rebekah Heller, a member of ICE, released Metafagote, her second solo album, in 2017 on Tundra. Featuring premiere recordings of four works written for Heller by Rand Steiger (Concatenation), Dai Fujikura (Following), Jason Eckardt (Wild Ginger), and the title composition by Felipe Lara, Megafagote supplies Heller with ample opportunities to demonstrate the bassoon’s entire bag of extended techniques, from multiphonics to microtonality, as well as various live electronic manipulations. That said, one never feels that the plethora of effects on display are mere showpieces; all four composers are working on extending the bounds of the instrument. There also is a significant interest demonstrated in spatiality which features in different ways in each of the pieces.

Steiger’s live electronics supply echoing canons and additional resonance to Heller’s bassoon. Following is a follow-up piece to the hard-driving Calling, written by Fujikura for Heller in 2011. This time around, angular melodies that span the compass of the instrument, beginning gently but picking up speed and energy over time, are hauntingly evocative. Eckhardt’s Wild Ginger employs many of the aforementioned extensions, but does so in a seamless way, using them to inflect asymmetrical groupings of melodic cells that variously congregate and concatenate i. Partway through, the interruption of rests and sustained pitches add other elements of tension, leading way to a low-register eruption that Heller unleashes with fulsome power. The closing section contrasts this with pitch bends and multiphonics in the bassoon’s upper register. It is a most persuasive piece.

Lara’s work is for live bassoon alongside a half-dozen pre-recorded bassoons. The chords and shrieking glissandos emitted from the tape part create an uneasy shadowing of a solo part that often departs from its prefabricated brethren on extended flights of fancy, but occasionally touches down to intone alongside them. Percussive articulation, wide pitch bends, trills, and a brusque gestural palette combine to make this a dramatic showpiece with which to end a compelling recording.

Heller’s advocacy for the bassoon, and her staunch commitment to expanding its repertoire, are laudable. Her playing is both detailed and thrilling throughout. Metafagote is one of my “Best-of” solo recordings of 2017.

On August 14th at Merkin Concert Hall, International Contemporary Ensemble will give the U.S. Premiere of Liza Lim’s How Forests Think as part of a Mostly Mozart Festival concert featuring music by female composers. The program also includes a US premiere of Anna Thorvaldsdottir’s Aequilibria and Earth Ears by the recently departed Pauline Oliveros. All three composers are favorites of mine – great programming ICE!

Wendy first premiered my piece, He Wishes for the Cloths of Heaven, a Yeats setting, in 2010 at a show that Kay and I presented at Bushwick Starr Theatre in Brooklyn. I selected the text because it was one of the readings at Kay’s and my wedding. In fact, the composition was a first anniversary present to Kay. It is inscribed:

They say that the proper gift for a first wedding anniversary is paper. I hope you don’t mind that mine includes notes.

Wendy has been a true champion of the piece, and has since performed it in Ohio and Alabama. Other champions need mentioning: Mezzo-soprano Megan Ihnen and violist John Yuan have performed Cloths of Heaven as a duo and Megan and mezzo-soprano Ellen Broen have also performed a voice-piano version with pianists Graeme Burgan and Jonathan Palmer Lakeland. Megan has even switched roles and performed it in a higher key with a violinist.

All of this to say that Wendy’s commission sparked my inspiration, and gave impetus to a piece of mine that has had a larger life than many, and that makes me all the more grateful to her. I am thrilled that she will be recording the piece and am excited by the works that are alongside it on the program; many are by close friends which makes this project feel particularly close-knit. She has made an IndieGoGo page for her funding campaign for the recording. You can check it out here.

To celebrate this year’s fiftieth anniversary season, Lincoln Center’s Mostly Mozart charged International Contemporary Ensemble with performing fifty new pieces over the course of the festival. Numbers 45-49 were presented at Merkin Hall on Tuesday, August 23rd. The fiftieth, music by Tyshawn Sorey celebrating Joséphine Baker, was slated for the 24th.

Tuesday’s program consisted entirely of concertos. In some cases, the composers used the term rather loosely, creating amorphously constructed entities rather than the formally distinct works one might expect in the genre. Nearly all were longer than their advertised times: starting at 7:30 PM, the first half alone was ninety minutes. At the concert’s conclusion, we dashed out the door for our train at a few minutes before ten. This loquacity did not always show the works in their best possible lights: all of the composers created fascinating sound worlds, but some tightening of construction would have served several of them well. Karina Canellakis, a prominent young conductor and violinist with an impressive pedigree in both areas, assuredly led ICE. With elegant gestures, she assumed a calming presence amid the maelstroms of complexity being wrought onstage.

The entire program was reordered, but the audience was guided through the changes by brief remarks from the stage by flutist Claire Chase and each of the composers (all four were present — a rare treat). The best piece on the program was also presented first. Marcos Balter’s Violin Concerto displayed formal clarity, abundant virtuosity, and a fascinating use of small percussion instruments (played by the ever nimble Nathan Davis). Violinist David Bowlin played one cascade after another of high harmonics and multi-stops with scintillating aplomb.

In Anthony Cheung’s Assumed Roles, violist Maiya Papach was given a more challenging set-up in which to operate. An unorthodox ensemble grouping, which included several instruments that played in or near the viola’s register and an electric guitar, meant that Cheung had to be judicious in his choice of demeanor for the soloist. He decided to have Papach vacillate between “roles,” working with the ensemble, playing prominently in front of them, and sometimes disappearing beneath their billowing sheets of sound.

The premiere of Dai Fujikura’s Cello Concerto featured a labyrinthine structure. Soloist Katinka Kleijn’s supple tone was challenged by often piercing responses from the ensemble. Cast in a single expansive movement, it was sometimes difficult on first hearing to follow the thread, but several signposts — sections where the cello played open strings and prominent harmonics — helped one to be reoriented.

Wang Lu’s Cloud Intimacy is designed to feature all the members of its ensemble in spotlight moments. It is also meant to be a commentary on technophilia. One heard the tapping of computer keys and ICE musicians got to ham it up with cell phones; the piece ends with a “selfie.” The soloistic aspects of the concerto were less prominently dealt with than the depiction, or distraction, of “Tinder.” However, guitarist Dan Lippel did get a chance to “rock out,” which he did with abandon.

The evening culminated with the US premiere of Fujikura’s Flute Concerto. Written for Chase, it contains many of her signature extended techniques: beat-boxing, multiphonic glisses, harmonics, and pitch bends. It also requires her to employ an array of instruments, from piccolo all the way down to the enormous (and voluptuous sounding) contrabass flute. Interestingly, rather than relying on its strident altissimo register, Fujikura features the underutilized lower register of the piccolo. Cast in five sections, the movement between instruments by Chase helped to delineate the piece’s form. The Flute Concerto has two versions, the chamber one heard here, and another in which Chase is accompanied by full orchestra, already premiered and recorded for Sony/Minabel. The chamber version was plenty for the intimate environs of Merkin Hall and proved to be an ebullient showcase for Chase.