Ashlee Mack has just posted a performance video of my Bagatelle for Solo Piano. It is one in a set of three, the others being for alto flute and then a duo for alto flute and piano. You can stream or purchase a studio recording of the whole set via the Bandcamp embed below. 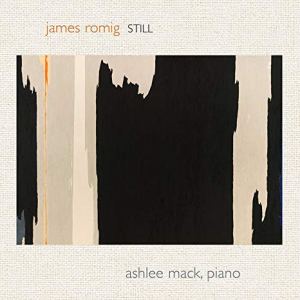 Composer James Romig has spent the past twenty years cultivating a body of work that embodies both rigorous structuring and a wide-ranging gestural palette. As is explained in Bruce Quaglia’s excellent liner notes for Romig’s first New World CD, Still, there is good reason for these two aspects to be so important to Romig. His training as a composer was with American modernists Charles Wuorinen and Milton Babbitt, while his background as a performer – a percussionist – included a number of works by minimalists such as Steve Reich.

Extra-musical touchstones also play a significant role as inspirations for the composer. A series of National Park residencies has provided him with natural beauty to contemplate while composing. Abstract Expressionist painters such as Clyfford Still, who is the titular reference point for Romig’s piece on this CD, also enliven his imagination.

Nowhere in Romig’s output to date is this confluence of influences more apparent than in Still, a nearly hour-long piece for solo piano. One can see the pitch material’s progression in a chart in the liner notes and note the comprehensiveness of its organization. Unlike Romig’s portrait disc Leaves from Modern Trees, where the pieces tend towards tautly incisive utterance, here the progression of pitch material evolves slowly in a prevailingly soft dynamic spectrum. Ashlee Mack, a frequent performer of Romig’s music, provides a sterling interpretation. Slow tempi are maintained no matter what local rhythms (some complex) ripple the surface texture. In addition, Mack voices the harmony skilfully, allowing the piece-long progression to be presented with abundant clarity.

One more composerly ghost lurks in the room: that of Morton Feldman. Also an appreciator of Abstract Expressionism, who created long single movement pieces that transformed slowly and remained primarily soft, Feldman could seem to be Still’s natural progenitor. While surface details and scale of composition are similar, there is a significant musical difference between Feldman’s paean to a painter like Philip Guston and Romig’s reference to Clyfford Still. As pointed out by theorists such as Thomas DeLio, the undergirding of a Feldman piece is indeed subject to an organizational structure. That said, his work seems more intuitive than Romig’s, which is methodical in the unfurling of its linear components and their constituent harmonies. Whether Feldman’s surface in any way inspires the depths of Still, I am not sure; it would be an interesting question to pose to Romig. Either way, Still is his most engaging and beguiling piece to date. One looks forward to hearing more works that accumulate Romig’s proclivity for parks, painters, maximalists, and minimalists; these many ingredients make for intriguing results.

Flutist John McMurtery and pianist Ashlee Mack have been two of my most dedicated advocates. They have played many of my pieces in recital, and made the first recording of “For Milton” for Perspectives of New Music/Open Space (Righteous Girls made the second for New Focus).

This Fall, McMurtery and Mack will be presenting several duo recitals in Illinois and Wisconsin (dates below). Among the pieces on the program will be my “For Milton.”