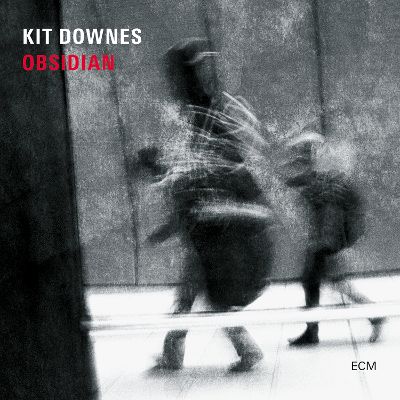 Prior to this recording, Kit Downes was primarily known as a pianist in jazz settings, notably leading his own trio and quintet. Obsidian is his debut CD as a leader for ECM Records; he previously appeared on the label as part of the Time is a Blind Guide release in 2015. However, Downes has a substantial background as an organist as well. The program on this recording consists primarily of his own works for organ, but there is also a noteworthy folk arrangement and engaging duet with tenor saxophonist Tom Challenger.

The organs employed on Obsidian are all in England, two in Suffolk at the Snape Church of John the Baptist and Bromeswell St Edmund Church, and Union Chapel Church in Islington, London. Instruments from different eras and in very different spaces, they inspire Downes to explore a host of imaginative timbres and approaches. Over an undulating ostinato, skittering solo passages impart a buoyant character to the album opener “Kings.” An evocative arrangement of the folk song “Black is the Colour” pits piccolo piping against ancient sounding harmonies in the flutes and bagpipe-flavored mixtures. “Rings of Saturn” is perhaps the most unorthodox of Downes’s pieces, filled with altissimo sustained notes and rife with airblown glissandos, an effect that is not found in conventional organ repertoire. The piece is well-titled, as it has an otherworldly ambience. Pitch bends populate “The Bone Gambler” as well, while vibrato and frolicsome filigrees animate “Flying Foxes.” “Seeing Things” is a joyous effusion of burbling arpeggios and the more usual fingered glissandos, demonstrating an almost bebop sensibility. Suitably titled, on “The Last Leviathan” Downes brings to bear considerable sonic power – with hints of whale song in some of the textures – and fluent musical grandeur.

Although some of the release seems inimitable, closely linked to Downes’s improvisatory and textural explorations, other pieces cry out for transcription; one could see other organists giving them a wider currency. “Modern Gods” is an exercise in modally tinged dissonant counterpoint, while “Ruth’s Song for the Sea” and the folk-inflected “The Gift” possess the stately quality of preludes.

The duet with Challenger is a tour de force, in which each adroitly anticipates and responds to the other’s gestures and even notes, as the fantastic simultaneities that occur at structural points in the piece attest. Once again, there is a supple jazz influence at work. While Downes provides room for Challenger’s solos, he also challenges him with formidable passages of his own. Obsidian contains much textural subtlety and fleet-footed music, but it is also gratifying to hear Downes and Challenger celebrating the power of their respective instruments. Heartily recommended.