NEW YORK – On October 6 & 7, 2017, Park Avenue Armory presented Ensemble Intercontemporain, conducted by Matthias Pintscher, in Répons, a major work by the recently deceased French composer Pierre Boulez. It was the first time that the composition has been heard in New York since one of its early incarnations in the 1980s (the Times was hard on him then). Boulez was an inveterate reviser, and the electroacoustic component of this piece continued to evolve with successive technological innovations. It is also the first large-scale work to be mounted here since the composer’s passing in 2016. 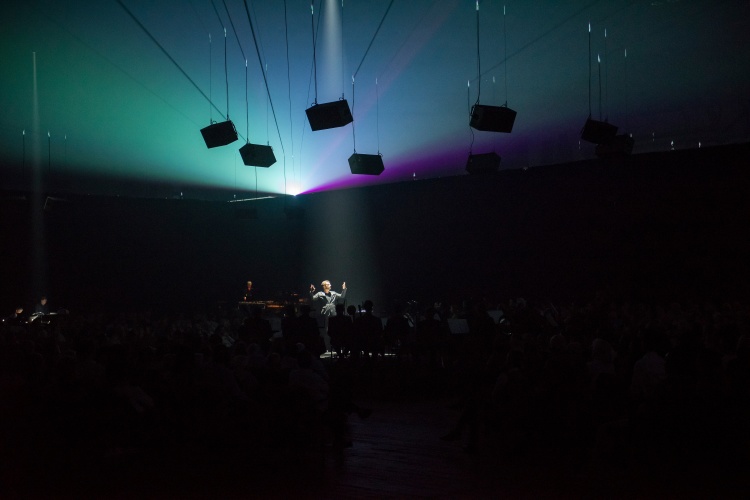 The performance of the roughly fifty-minute long work consisted of two renditions, back-to-back with only a short intermission (many of the principals had worked up a sweat by the end of the evening; justifiably so!) For our section of the crowd, the first performance found the ensemble and Pintscher seated in the center with the audience surrounding them; with their backs facing much of the audience. Brass textures and the section’s seemingly ceaseless mute changes were on full display; some of the string passages were distant-sounding as a result. For the second hearing, the audience moved to a different vantage point: from our seats the musicians and conductor faced us. There was more clarity in all of the parts.

That said, the change of seating was not a wasted gesture: it made for some fascinating listening to the roles of the various sections in the construction of the work. For my seat partner, a theatre person, it was a treat that permitted one better to assess the affects of lighting and the staged quality of the gestural components onstage. Pierre Audi, mise-en-space, and lighting designer Urs Schönebaum did an excellent job of providing an expansive environment equal to the space in the Armory. The use of global changes of lighting suited the piece far better than would have a busier set of cues.

The seating change paid another dividend: one got a different earful of what was going on behind and around the audience.  Soloists Samuel Favre, Gilles Durot, percussion (mallet instruments); Dmitri Vassilakis, Hidéki Nagano, piano; Frédérique Cambreling, harp; and Luigi Gaggero, cymbalum, were seated in an outer circle, surrounding the audience and the interior cohort of musicians. Their music was treated to amplification and electronic manipulation by longtime IRCAM sound-smith Andrew Gerzso, who worked alongside Gilbert Nouno and Jérémie Henrot, two of IRCAM’s sound designers, to create the impressive and well-balanced spatial effects.

Répons is labyrinthine in its complexity, formidable in its difficulties. That said, there is a jubilant air to its challenges. In particular, the sensuous nature of the bell-like solo parts, particularly the percussionists’ mallet instruments and the cymbalum, proves irresistible. Although there is much angularity and virtuosity on display, as one finds in a large amount of Boulez’s later work there are also pitches and chord complexes that help to under gird the proceedings and provide the listener with a sense of trajectory amid the flurries of activity. I was quite grateful to have a perusal copy of the score to consult. Universal’s edition of the score is clearly notated and has an elegant layout. Despite the many divisi in Répons, it allows for manageable study of the piece’s materials and flow.

There was palpable enthusiasm from the large number of attendees at the October 7th concert (I opted for this one to celebrate my birthday with Boulez!). It will be interesting to see how reception for his work evolves. Boulez had a somewhat fraught tenure with the New York Philharmonic in the 1970s, but he remained highly regarded in contemporary music circles and his music has hardly been neglected in New York. A memorable performance from a few years ago was a scintillating traversal of Dérive 2 at Miller Theatre. Thus one hopes that the Armory performances will be the first of many retrospectives. The strength of Ensemble Intercontemporain’s presentation should no doubt help to encourage further investigation of Boulez. It was a marvelous event both from the musical and theatrical points of view.