At National Sawdust on Friday April 7th at 7 PM, Opera Cabal presents the premiere of Ken Ueno’s new opera Aeolus. Joined by vocalist Majel Connery and Flux Quartet, Ueno performs throughout the opera. His fascinating blend of vocal techniques includes microtonal inflections, megaphone-amplified directives, and throat-singing. Electronics, video projections, and an architecturally conceived set design converge to make Aeolus a potent multimedia concoction. I recently caught up with Ken as he was in the thick of preparations for the opera.

Hi Ken. Thanks for taking the time to talk with Sequenza 21.

Why are you calling this an opera instead of some other genre? As you well know, multimedia theater pieces are called all sorts of things…

Following the examples of Monteverdi, Mozart, and especially Nono, “opera” seems to be an open enough label, if we need a label, so I hope it’s appropriate for this piece.  But you’re right – I don’t really know what to call it. It doesn’t have a regular narrative. It features two voices that are in distinct contrast to bel canto singing. But I am attached to the possibilities Prometeo opens up, so if Nono’s is an opera, then, Aeolus, can be an opera too, right?  Aeolus does feature a suoni mobili (Nono calls the movement of sound the main drama in Prometeo) characteristic in that, in the guise of Aeolus (the ruler of the winds), I move around the hall, directing my non-semantic vocalizations with a megaphone to articulate the architecture, the space, as an instrument. 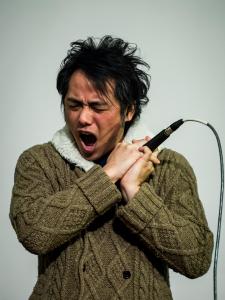 You’ve mentioned that there are autobiographical elements in the libretto. Since it is fairly nonlinear in terms of narrativity, would you like to share how some of your own history fits in?

Memory is non-linear.  Spaces between texts and texts in memory become islands in search of a place in time, an ostensible home, which the idea of a Penelope represents.  My biographical circumstance is that my family moved around so much during my formative years that I don’t have a normative sensation of a home. So, the idea of a home is a mythic space for me, one I’ve also begun to associate with not only a place, but also specific people with whom I shared lived in those spaces that felt like places to which I belonged. That’s also, I think, why James Joyce resonates so powerfully in me. If there is a main narrative in Aeolus, it’s the counterpoint between the semantic and non-semantic in search of a home.

If I may, here’s an excerpt of a draft I’m writing for something else, which elaborates on this:

My own language acquisition parallels Dedalus’ in that the trajectory from babbling to fluency did filter out a palette of sounds that were extraneous to language. As a baby, I remember understanding language before I could actually speak. I remember both the frustration of not being able to communicate, as well as the tiny victories when I somehow managed to reach out and get through – sometimes purely through the inflections of non-semantic vocalizations, maybe combined with clear physical gestures like pointing or shaking my head.

When I was four, my family moved to Switzerland, and apart from speaking Japanese with my family I was a mute child again, unable to speak the local French. The burgeoning richness of my internal life was frustrated by this communication setback. Around that time, I was given a portable Aiwa tape recorder and started to make non-linear musique concrète, playing with snippets of sounds of my little world in exile. Listening to those recordings now, through auto-archaeology, I discover not only that I was vocalizing non-semantically, but that I was singing multiphonics. I was babbling, testing the limits of my vocal repertoire, expanding the repertoire of sounds my body could make. Unhinged from semantic obligation, I was freely playing at making sounds for the pure sake of making sounds, developing a series of dexterous moves ancillary to spoken language – to logos. I remember how it felt. The complex vibrations of the multiphonics reverberated in my body, shaking my bones. It was soothing. I learned to make a variety of sounds that registered different feelings. They felt like different weights of the world. Not being able to speak the local language, not having any friends, I was performing, rehearsing for my future self. The future will rationalize the past. When I read James Joyce as a teenager, the tropes of alienation and exile, and the distance between language as sound and language as semantic medium, all resonated with me.

Tell us about your collaborators.

Majel Connery is my singer.  Though classically trained, she has a beautiful lyrical voice, that reminds me of Elena Tonra from Daughter or Beth Gibbons of Portishead. But that’s really unfair. I should not be naming names or comparing her to anyone else – she has a great voice, she is a primary referent in her own right. When I heard her voice and imagined what it was capable of, I knew I wanted to write songs for her. Songs that would carry the semantic exposition in Aeolus. She’s been very generous with me in trying out sketches of my songs in different keys, etc., so that we can get to the right voice/word combination to get to the pathos that I want to express. Majel is also a brilliant project leader. She is Opera Cabal. She is our fearless leader and most responsible for all of this happening. A visionary!

Thomas Tsang is a brilliant architect with whom I have been collaborating for ten years.  We met as fellows at the American Academy in Rome, and we’ve collaborated on installations ever since. As an artist, he brings a fully-fledged multidisciplinary edge to architecture. He questions traditional outputs and bravely creates installations, events, workshops that challenge us to rethink the history of specialization in our related fields.  The full vision for the opera is to have a space that he designs that is something more than a set or venue, something more integral to the expression of the piece. We are working towards that.

Erin Johnson is a video artist with whom I have been collaborating over the last few years. She’s an all-round creative force. Many of her works thread the line between video art, installation, performance art, curation, and community engagement. She naturally problematizes categories in her artistic output. She curated a work of mine last summer – Fortress Brass, a site-specific piece that took place on boats and then at Fort Gorges in Portland Harbor, in Maine. Erin made videos for four of the scenes in Aeolus, for scenes with voice-overs. Voice-overs take the place of dialogue in Aeolus (a move that I first began to experiment with in my first opera, Gallo). Being pre-recorded, the voice-overs inhabit a different time/place: it serves a distancing function.

I am also lucky to be working with the renown Flux Quartet. Specialists in the extreme demands of new music, breathtaking in their courage and inspiring. I am blessed to have this team.

What are some of the electronic elements in the piece?

Mostly, the electronics are backing tracks for the pop songs.  In one scene, I perform with a Max patch that the brilliant designer/composer Ilya Rostovtsev made for me. The patch lets me use my iPhone as a controller for algorithmic drums.

What does lateral bowing sound like? You’ve become a big fan of it … how did you first discover it as a technique?

I like lateral bowing because it sounds like breath – the link between my vocal practice, my body, and the embodied choreography of sounds that I notate for instrumentalists to perform.  I first came up with lateral bowing, when I was experimenting on a viola during the composition of my viola concerto, Talus.

What’s next for you?

I’m lucky to have pieces upcoming for talented friends: a piece for five-string baroque cello for Elinor Frey; a solo trumpet + electronics work for Andy Kozar; a solo cello piece for Jason Calloway; a saxophone piece for Vincent Daoud; a trio for Kim Kashkashian; and a long overdue piece for piano for Kathy Supove (and some other things too).