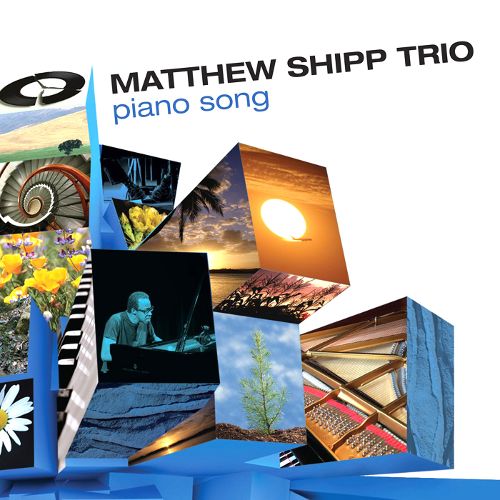 Pianist Matthew Shipp has been a prolific recording artist: he has released dozens of albums as a leader and appeared on dozens more as a collaborator. However, Piano Song, his 2017 recording for Thirsty Ear,  will be his last for the imprint and, likely, his last for a US label (Shipp concedes that there may be a few more CDs released out of Europe). Shipp will continue to curate the releases on Thirsty Ear’s Blue Series (a jazz series that welcomes cross-genre efforts) and he will continue to play live. That said, for those of us who are fans of Shipp’s recordings, it is saddening to contemplate that he is nearing the end of the road on this part of his musical journey.

Piano Song is a consistently engaging valedictory statement. A trio date with two solo tunes (all by Shipp), like much of Thirsty Ear’s output the CD is enthusiastically eclectic in terms of its stylistic profile. While bassist Michael Bisio and drummer Newman Taylor-Baker may not be as familiar to listeners as some of Shipp’s other collaborators, they form a beautifully well-connected rhythm section. Bisio’s solo on “The Cosmopolitan” is supple melodically and versatile harmonically. Taylor-Baker’s snare filigrees and drum fills considerably enliven both that tune and “Flying Carpet.” The rhythm section crafts a fluent and mysterious introduction for “Scrambled Brain.” Bisio employs double-stops in a wide-ranging part while Taylor-Baker coaxes all manner of subtleties from the snare drum, evolving into a more kinetic posture and adding cymbals and toms as the duo continues. This is a noteworthy aspect of Shipp’s approach to the trio: allowing duo subsets of the ensemble to really shine at various moments on the recording.

Shipp’s playing, in addition to having its own original stamp showing, encompasses the work of a wide range of progenitors: Taylor, Hill, Monk, Tyner, and Ellington, just to name a few. Shipp’s short solo at the beginning of the proceedings, and his intro on “Silence of”  combine modal and post-bop lyricism. He forcefully swings on “Micro Wave,” a tune that moves from quasi-bop licks to far more dissonant utterances. “Mind Space” finds him supplying fleet-fingered angular lines countered by Taylor-Baker, while repeated notes and chords as well as achingly slow Schoenbergian arpeggiations are accompanied by Bisio’s arco playing on “Void of Sea.” “The Nature Of” features Shipp’s signature low register melodies, in which a bass line is accompanied by a countermelody up an octave or so. Eventually, the piece expands to encompass the upper register too, with vertical stabs added to the duet texture. “Gravity Point” is rife with repetition, with halting ostinatos and tremolos set against a middle register piano solo and furious interplay from the rhythm section. The album closes with the title tune, a poignant ballad that the listener may imagine as Shipp waving goodbye to this chapter. Shipp’s discography is an impressive legacy and, at 56, one senses that he has much more to offer the jazz world in future incarnations.