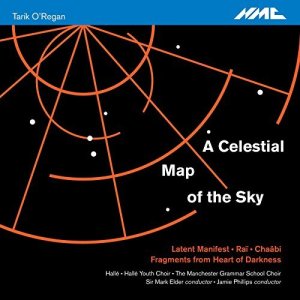 A Celestial Map of the Sky

Tarik O’Regan’s music has appeared upon some thirty recordings, but NMC’s CD, A Celestial Map of the Sky, is the first entirely devoted to his orchestra music. The disc supplies an excellent overview of the British composer’s work. The title piece is persuasively performed. The Hallé Youth Choir and The Manchester Grammar School Choir make music worthy of cherubim and the Hallé Orchestra accompanies them with clustered harmonies that glow. The piece has a fascinating back story: it was inspired by two woodcuts of the celestial hemispheres engraved by Albrecht Dürer in 1515. These are among the oldest “star charts” that have been found in Europe. Latent Manifest takes its inspiration from a few centuries later, in a single gesture from a Bach violin sonata which then undergoes procedures of expansion until it positively flourishes. Premiered at the BBC Proms, Latent Manifest is a muscularly orchestrated work that features Hallé’s formidable brass section to stirring effect.

O’Regan is of Moroccan descent on his mother’s side. When he was growing up, he lived for a time in Africa. Raï and Chaâbi present elements of African folk music through a Western lens.

Components from that tradition – African instruments, choices of timbre, and, particularly, rhythmic patterns – enliven both pieces. It is here that O’Regan’s music takes on its most “post-minimal guise,” exploring percussive ostinatos punctuated by strings. Here and elsewhere, the orchestral forces are martialed with incisive command by Jamie Phillips and Sir Mark Elder. The disc is capped off with Fragments from Heart of Darkness, a suite of instrumental music from O’Regan’s chamber opera based on the Joseph Conrad book. It begins suitably mysteriously with sinuous chromaticism but gradually moves toward another bevy of ostinatos, first folk-tinged and then martially stentorian.

Those who would like to hear a bit of the composer’s famed vocal music aren’t left wanting by this project. A bonus download-only track, “Now Fatal Change,” features countertenor Ryland Angel and violinist Lara St. John. A reworking of material found in Chaâbi, with a text originally set by Henry Purcell, it is an attractive piece fetchingly performed by the duo. Angel has a rich, resonant voice that handles both registral edges of the vocal part with ease. St. John draws similarly plummy tone from her instrument, finely tuning the many passages of multiple stops and performing ostinato sections with verve.

He may be as prolific as all get out, but A Celestial Map of the Sky marks itself as a special project in O’Regan’s catalog. Recommended.