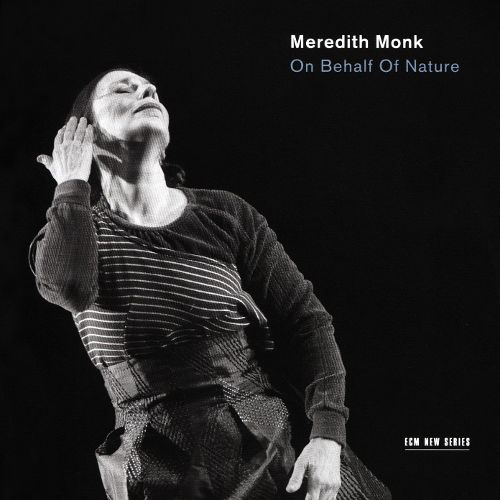 Meredith Monk turns 74 today. An early birthday present came from ECM Records on November 4th: a recording of Monk’s On Behalf of Nature project. We do not have the benefit of language: the “text” consists of songs, chants, and syllabification in unknown tongues. And there is no narrative per se, but there are clues present in the piece’s sound world that readily suggest its environmental message: at times with clarion calls; at others, with poignant vulnerability.

Joined by a versatile troupe of vocalists (many of whom also play instruments on the recording), Monk sings with tremendous vigor and impressive range. The panoply of extended techniques on display, both vocal and instrumental, elicit a veritable catalog of sounds. Some are imitative of all manner of fauna: insects, birds, and mammals. Vocal play with “nonsense” syllables moves between jazz scat and primordial language. Likewise, the materials inhabited by the instrumental forces coexist between rustic primitivism, minimalist ostinatos, and sophisticated microtonality.

Monk is not afraid to make sounds that aren’t conventionally “pretty:” howls, chittering, and screaming among them. However, she often manages to evoke beauty even in the most raw and unconventional moments of On Behalf of Nature. It is as if we are being implored, by any means necessary, to attend more fully to the world around us. While we are deprived the visual and choreographic elements of its staging in this audio-only recording (one hopes ECM might consider producing a film of the work’s acclaimed stage incarnation), the music is amply impressive all by itself. It is Meredith Monk’s birthday, true, but her gifts are shared with us.