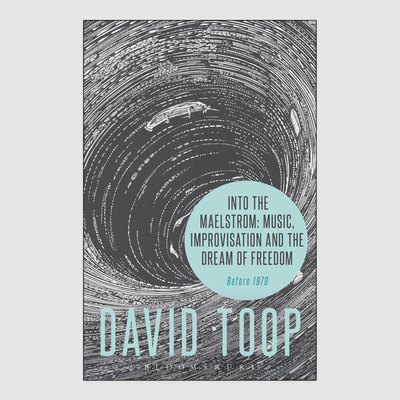 Into the Maelstrom: Music, Improvisation, and the Dream of Freedom before 1970

Even given the relative expanse of a projected two-volume history of improvised music, David Toop has set lofty goals for himself. In volume one, Into the Maelstrom: Music, Improvisation, and the Dream of Freedom before 1970, he discusses a number of musical figures from improvising communities: Derek Bailey, Evan Parker, Steve Beresford, Keith Rowe, Ornette Coleman, and Eric Dolphy are a small sampling of those who loom large. John Cage is a totemic figure discussed from a variety of angles. Such collectives as AMM, MEV, Spontaneous Music Ensemble, Company, and Gruppo di Improvvisazione Nuova Consonanza feature prominently as well. In addition, Toop connects improvisation to a panoply of other reference points, musical and otherwise, such as rock, concert music, fine art, film, and literature. Politics and historical events and their influence on musicians is a particularly well-drawn through line.

One would be hard pressed to take a strictly chronological approach to reading Into the Maelstrom. A great pleasure is the oftimes improvisatory feel of its labyrinthine passages. In this sense it jubilantly resembles the Edgar Allen Poe story from which it takes its title. No matter how far-flung a new passage may at first seem, Toop finds a way to integrate it into the fabric of the book. For the most part, Maelstrom is confined to the genesis and development of free playing in the decades leading up to 1970. Digressions from this era, such as transcribed later interviews and personal anecdotes, are used to provide a more comprehensive portrait of particular figures and incidents. Nor does Toop eschew discussion of earlier figures. Indeed, his profiles of musicians such as Art Tatum, Erroll Garner, and Stuff Smith trace a lineage of free playing, or at the very least playing on the cusp of free, that is farther reaching than is often enough acknowledged. Flashbacks and flashforwards are also employed to tease out thematic issues, such as audience responsiveness (or non-responsiveness, and occasionally dangerous hostility), interaction between musicians (with its own degrees of responsiveness and even dangerous hostility), and, especially, issues of freedom, both in musical and political contexts. Thus, Into the Maelstrom allows us a glimpse into an ever-changing landscape of varying interactions, all of which contribute to the development of improvisation. I’m eager to read its companion second volume.