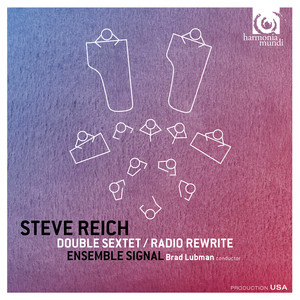 There are several recordings out this year commemorating Steve Reich at eighty (Allan Kozinn provides more about this in an excellent WSJ article). I haven’t yet heard the LSO’s CD, but I agree with Kozinn’s assessment that both Third Coast Percussion and Ensemble Signal have provided us with stirring listening in their respective new entries into Reich’s discography.

Brad Lubman leads Signal in musically detailed and energetic performances of both of the pieces included on this Harmonia Mundi CD. The first, Double Sextet (2007), garnered Reich the 2009 Pulitzer Prize in Music. Originally composed for six musicians – the chamber ensemble Eighth Blackbird – to play against prerecorded versions of themselves, here Double Sextet is recast as a work for a dozen individual performers. Within each movement’s overall tempo, there are overlapping time strands operating at various tempi. The combination of these two factors – compositional and performative – allows for a virtuosic level of syncronization. This complexity of rhythm corresponds to the enhanced harmonic palette that Reich employs here, with many more “crunch chords” than is his usual wont.

Sure, Radio Rewrite does contain elements of two Radiohead songs: “Everything in its Right Place” and “Jigsaw Falling into Place.” Their appearances are ephemeral and one gathers that the songs’ influence is to be felt far more beneath the surface of the piece than is to be found in mere quotation; they stoke the motoric engine that buoys this energetic and engaging work.