Pianist Julia Hülsmann and vocalist Theo Bleckmann join forces on A Clear Midnight: Kurt Weill and America, a new recording for ECM Records. Joined by trumpeter and flugelhornist Tom Arthurs, bassist Marc Muellbauer, and drummer Heinrich Köbberling, they present renditions of Weill’s later songs alongside Hülsmann’s settings of poems by Walt Whitman. In addition to lesser known examples from the Weill canon, there are some familiar compositions here, such as “Mack the Knife” and “Alabama Song.” However, all of the music is rendered with a fresh approach. 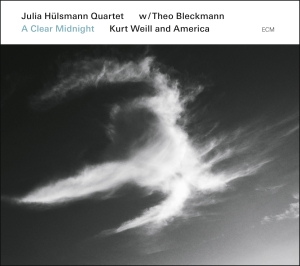 Although he has appeared on two of Meredith Monk’s New Series CDs, this is Bleckmann’s first foray on ECM as a jazz singer. His imaginative use of the voice features percussive effects, multiphonics, and fluid vocalise. Hülsmann is equally creative in her approach, pacing harmonic changes to allow for spacious, even static, stretches. These are complemented by rapid solo passages and occasional punctuations played inside the piano.

Both Muellbauer and Köbberling are attentive musical partners and a crackerjack rhythm section, interacting with Hülsmann (and Bleckmann) in intricate exchanges.  Arthurs supplies altissimo flourishes aplenty. But he also serves as the lyrical backbone of the recording, crafting long-lined solos with a vocal quality to them. A Clear Midnight is an unconventional take on Kurt Weill’s music. However, its considerable beauty often lies in its idiosyncrasies.

This week, Hülsmann’s trio and Bleckmann (alas, no Arthurs) play three shows in support of the CD, two at Neue Gallerie Café Sabarsky on April 16th and 17th and another on the 18th at An Die Musik Live in Baltimore.