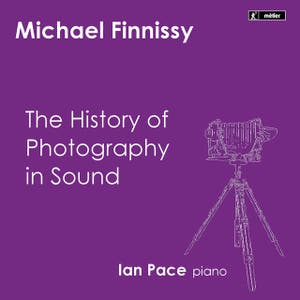 The History of Photography in Sound

Clocking in at well over three hundred minutes in duration, Michael Finnissy’s eleven-movement cycle for solo piano The History of Photography in Sound (composed 1997-2000) is a gargantuan effort for both composer and performer. Ian Pace is the foremost advocate for and interpreter of Finnissy’s piano music – over the past two decades, he has performed all of it and is presently writing a monograph about the composer. One cannot imagine a more heartfelt nor technically skilful performance of this work.

From a composer with a more directly programmatic bent, a work titled “North American Spirituals,” as is this piece’s third movement, would sound very different. But Finnissy’s musical language revels in a complex interplay of far flung reference points, ample virtuosity, and a penchant for pungent, dense harmonies and a coruscating rhythmic grid. Thus, musical program can sometimes be integrated in earnest or with a measure of critical distance – oftentimes, both aspects of dealing with narrative are at least somewhat present. The past, especially past music, can sometimes seem to be a far-off memory distantly evoked; it can also seem to be lampooned in over-the-top fashion.

Finnissy has been called a “New Complexity” composer, and late modernism is merely one strain of his work. While Ives’s sense of collage and quotation certainly is a touchstone, so too are Scriabin, Schoenberg, Liszt, folksong, pop standards, and, yes, Ferneyhough. Also present are a variety of recurring themes – homosexuality, freedom, violence, sensuality, Christianity, community, literature, poetics – the list goes on.

The question many listeners inevitably will have, particularly with the prospect of 5 ½ hours of Finnissy’s music ahead, is how to make heads or tails of an overarching message or narrative: it would seem to elude one’s grasp. And that’s because, as far as this writer can tell, there isn’t a single idée fixe to be had: that’s not the reason for this cycle’s existence. We may like to think that a monumental and cyclic composition must have a single thread for us to wend our way through it – even the twists and turns of the Ring Cycle have a mythological framework for us (tenuously) to grip. Pace has written often of Finnissy’s generous spirit, and if there is a through line to be found in The History of Photography in Sound, it is that spirit of generosity bestowing upon us all the many musical ideas Finnissy has to offer: and that’s quite a lot. So, don’t worry about “getting it” on first hearing: that’s not the point either. Instead, revel; wallow even, in the embarrassment of riches and abundant virtuosity on display here. Then, listen again, gradually peeling away successive layers to find your favorite bits.

Caution: The History of Photography in Sound is a heavy dose for a single sitting, much like watching a season of Breaking Bad in a single weekend: binge at your own risk! Still, this is a boxed set that is wholeheartedly recommended.