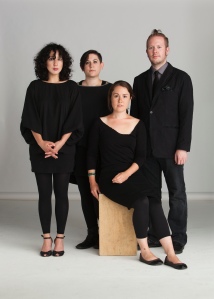 A bit of cheering for the “home team,” as ACME played on our last Sequenza 21 concert.

As I mentioned in my Musical America review of In the Salon’s previous installment, a concert featuring piano music by Bernard Rands, these events are my favorite kind of outreach: the programs are well-curated with fine music, and the conversational tone of the interview doesn’t lead to the participants ever talking down to the audience. Instead, they had substantive things to say about the music. Like Rands, Stucky is an excellent talker; the many residencies he’s held have served him in good stead; he knows how to connect well with an audience. It was also impressive to learn from someone such as Stucky, who has the details of seemingly each piece in a composer’s catalog and the biographical details surrounding them at his fingertips. Kaminsky was well-prepped too.

ACME played three pieces by Lutoslawski and two by Stucky. Stucky acknowledged that the works selected, a string quartet titled Nell’ombra, nella luce and Dialoghi, a set of variations for solo cello, owe a debt to Lutoslawski: but not in any sort of overt troping or near-quotation. Instead, both composers are interested in exploring texture, in evolving timbral events, and both have the capacity for great delicacy contrasted with ferocious musical passages.

Dialoghi, in particular, with its myriad effects and considerable technical demands, was an excellent showcase for Jensen.

The cellist was still more impressive in Lutoslawski’s challenging and mercurial Sacher Variations, embodying the work with commitment and impressive authority. Occasionally I found the composer’s earlier, folk-music inspired duo for viola and cello, Bukoliki, to be rendered a bit coolly. ACME’s performance of Lutoslawski’s String Quartet, a punctilious and often craggy high modernist masterpiece, was in contrast a visceral experience; in its best passages, redolent with searing intensity.

One hopes that Kaminsky will continue to organize In the Salon events; they are a bright spot on the Upper West Side’s musical landscape.