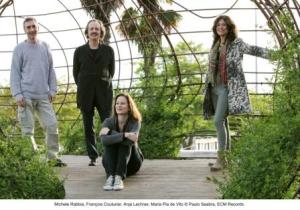 The works of eighteenth century composers such as Bach, Handel, and Vivaldi have been subject to all manner of reinterpretation by contemporary artists in myriad styles: jazz, gospel, bluegrass, rock, and so forth. Neapolitan composer Giovanni Battista Pergolesi (1710-1736) hasn’t thus far been popular among those reworking baroque music. That may change with the release of Il Pergolese, a collaboration between vocalist Maria Pia De Vito, pianist Francois Couturier, cellist Anja Lechner, and percussionist Michele Rabbia that is emotive, imaginative, and stylistically fluid.

Pergolesi is best known for composing vocal music – operas and sacred music both (his Stabat Mater setting is particularly fine). De Vito’s singing of the evocative “Ogni pena cchiú spietata,” with its hauntingly repeated minor triads, sits astride baroque opera and pop chanteuse traditions, making the hybrid nature of this project clear from the outset.

Many of the arias from Pergolesi’s operas have been resurrected as staples of the repertoire studied by voice students, who treat them like “art songs” – recital repertoire – rather than presenting them in a theatrical context. Sometimes these “songs,” taken too lightly, are put before students out their depth. Thus it is particularly heartening to hear Lechner lead a beautifully soulful rendition of “Tre giorni son che Nina” on Il Pergolese, which serves to rehabilitate it from the aforementioned lowly fate of freshman recital fodder.

Rabbia’s ambient electronics halo De Vito’s melismatic, rhythmically free, and folk music inflected version of “In compagnia d’amore I;” in places her delivery is reminiscent of Cathy Berberian singing Luciano Berio folksong settings. Lechner and Couturier join Rabbia on “In compagnia d’amore II,” an interpretation more tilted toward ecstatic jazz than modern classical, with ardent soloing from the pianist, pizzicato cello lines, and articulative, rather than steadily pulsing, percussion gestures. Another fascinating selection is the exploration by De Vito and Couterier of material from the Stabat Mater, translated into Neapolitan to better show its roots in and connections to local traditions and music-making. Purists might balk, but this is a respectful and musically inventive homage to an underappreciated composer.